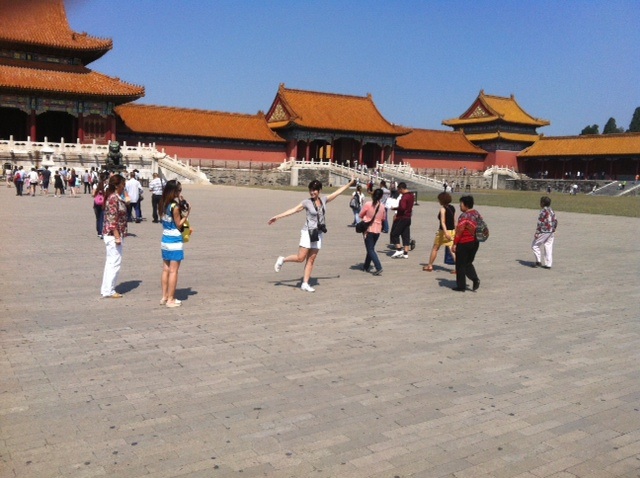 There’s something very strange going on here in Beijing. People stare at Jamie like she’s from another planet. It really is quite bizarre.

Check out the photo above: Jamie was doing a silly pose in the Forbidden City when the young Chinese woman and her mother (just to Jamie’s left in the photo) approached us and asked if I would take a photo of the three of them together. They were giddy — almost beyond words — when she agreed to do it.

Today was the weirdest of all. People were taking photos and videos of her all day. We were resting our feet at a sidewalk cafe when I noticed a young couple snapping one photo of her after another. I said, “Hey, Jamie, wave at them.” She did. They took the photo of her waving, broke into huge smiles and the young woman started jumping up and down and clapping her hands with excitement.

Another young woman told Jamie that people stare because she has “a tall nose and big eyes.” We assume she meant that as a compliment.

We have another theory.

Mandarin Gourmet, out on Los Osos Valley Road, is our favorite Chinese restaurant in San Luis Obispo. Our favorite waitress, a young Chinese immigrant, once told us that Jamie looks exactly like a famous Chinese actress, which seemed very odd because there are no Asians swimming in Jamie’s gene pool.

But who knows? The Chinese also eat live worms and scorpions, so one never knows why they do the things they do.