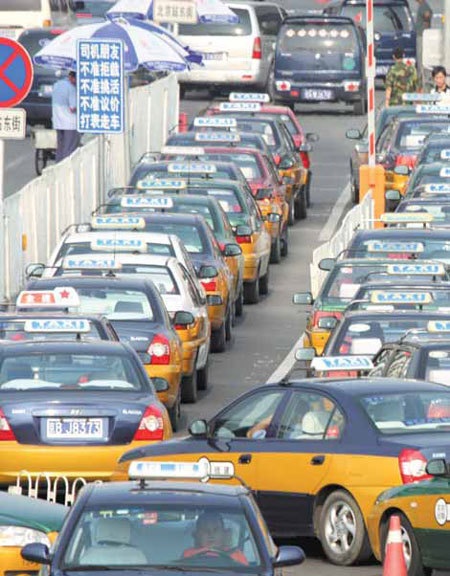 When we arrived at the Beijing train station at 5:45 a.m. it was already packed full of thousands of Chinese, all screaming into their cell phones. It was cacophony on steroids.

We worked our way through the crowd to the taxi queue. I had the name and address of the hotel written down on a piece of paper and showed it to about 20 different taxi drivers. Some of them claimed they didn’t speak English, others rudely waved us away. We were getting very frustrated and couldn’t figure out why none of them would give us a ride.

One driver finally indicated that he would take us to our hotel, the Marriott Great Wall Beijing, and motioned for us to put our bags in his trunk.

We climbed into the back seat of the cab. He turned on the meter, we left the station, drove about 100 yards and pulled into a driveway. The driver indicated that we had arrived at our destination.

Holy crap. We had no idea that our hotel was so close to the train station. The ride was so short that the fare hadn’t even risen from the minimum 13 yuans.

I asked the driver what the fare was. He said, “Twenty.” I gratefully handed him 50 yuan note (about $8) and went into the hotel.

No wonder an entire fleet of taxis turned us down. There’s nothing a taxi driver hates more than waiting in a long queue and then getting a short fare. And it would be tough to find a shorter fare than ours.