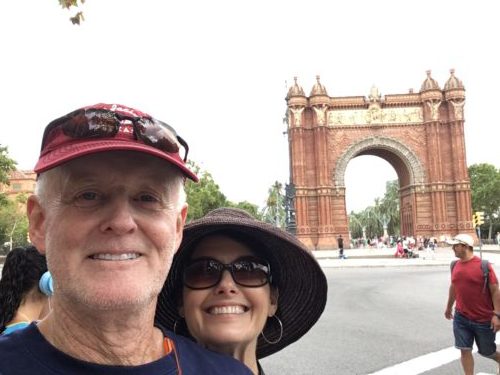 So we’re walking down the street in Barcelona when Jamie says, “Hey, that looks just like the Arc de Triomphe.” I’ve never been to Paris, but I’ve seen plenty of photos of the famous Paris monument.

I had to look it up on Wikipedia, my source for all official and absolutely accurate information.

In Paris, “The Arc de Triomphe honours those who fought and died for France in the French Revolutionary and Napoleonic Wars, with the names of all French victories and generals inscribed on its inner and outer surfaces. Beneath its vault lies the Tomb of the Unknown Soldier from World War I.”

In Barcelona, “The Arc de Triomf … was built by architect Josep Vilaseca i Casanovas as the main access gate for the 1888 Barcelona World Fair.”