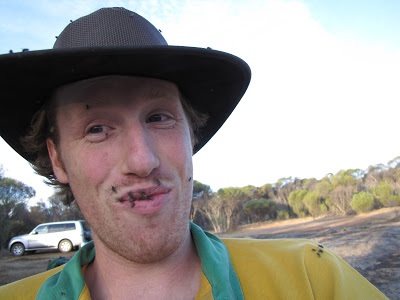 We’ve been on the road for just under three months now, which takes care of the “time flies” part of the headline. The “flies time” takes a little more explanation.

C’mon, man, I grew up on a dairy farm with hundreds of cows that generated tons of cow shit that attracted millions of flies. So I know flies and let me assure you that there is no comparison between ordinary American house flies and Australian bush flies.

The former can be annoying, but the latter can drive you right to the brink of complete insanity.

There are billions of them. The moment you step outdoors they swarm onto your face in search of moisture from your eyes, ears, nose and mouth.

The only way to protect yourself, short of wearing a net over your head, is to do what’s called the Australian Salute.

Here’s how to do it: Hold your hand straight up in front of your face, thumb toward your nose. Now flick your wrist back and forth like a windshield wiper during a particularly heavy rain storm. Repeat. Frequently.

It won’t make the flies leave you alone, but it will provide a little temporary relief until the next squadron of flies comes in for a landing.

There’s nothing funnier than sitting inside your nice, air conditioned house and watching Aussie TV newscasters doing field reports while trying not to do the Aussie Salute as flies land on their faces and crawl up their noses. Eventually they can’t stand it anymore and are forced to do the Salute to flick them away.