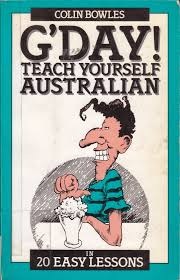 Our friend Diane Fleming added a comment to the story about the film Mystery Road that said, “I watched the trailer and couldn’t understand a word they said.” Welcome to Australia where they speak English, but often not the same English we speak in America.

With that in mind, we’ve been writing down all the words and phrases we hear that confuse and/or amuse us. Of course, everyone knows “barbie” thanks to the Paul Hogan’s commercials for Australian Tourism. But at least that one’s relatively comprehensible. Others aren’t.

UPDATE: We’ll keep adding more definitions as we run across or remember them.
Cuppa: A cup of tea (“How about a nice cuppa, lovey?”)
Schoolies: Students

The Original List:
Abo: Aborigine. Now considered offensive, but still heard occasionally.
Arvo: Afternoon
Avo: Avocado
Barrack: Cheer for a team
Bikie: Member of a motorcycle gang
Bikkie: Cookie
Billie: Teapot
Bloody oath: That’s certainly true
Bludger: Lazy person
Boomer: Large male kangaroo
Bottle shop: Liquor store
Brekkie: Breakfast
Brickie: Bricklayer
Brizzie: Brisbane, a city in the Aussie state of Queensland
Budgie: Budgerigar or parakeet
Budgie smuggler: Speedo swimsuit (this one is particularly funny when you imagine what it would look like it you stuffed a parakeet into your shorts. Or in my case, a particularly large parrot at the height of his plumage.)
Bugs: Mud crabs (Jamie was disgusted by the name until she tasted one)
Chockie: Chocolate
Chook: Chicken
Chrissie: Christmas
Chunder: Vomit
Cozzie: Bathing suit
Crook: Sick, or badly made
Dag: A funny person or nerd
Digger: Soldier
Dunny: Outhouse
Esky: Ice chest
Fairy floss: Cotton candy
Footy: Australian Rules football
Freo: Fremantle, a town in Western Australia
Galah: A fool, named after the common cockatoo of the same name
Gobsmacked: Surprised
Gone walkabout: Lost and can’t be found
Good on ya: Good for you
Grog: Beer
Hoon: Hooligan
How ya goin’: How are you?
Jackaroo: Cowboy on a cattle station
Joey: A baby kangaroo (and the name of the best cat we’ve ever had)
Kindie: Kindergarten
Lolly: Candy
Maccas: McDonalds
Maggie: Magpie
Mob: Any group of people
Mozzie: Mosquito
Muzzie: Muslim
Nipper: Child
Dry as a nun’s nasty: Dry
Ocker: Unsophisticated person, a red neck
Oldies: Parents
Oz: Australia
Pissed: Drunk (this one really confused us at first because we thought it meant angry, like it does in the US)
Pokies: Slot machines
Pommies: Englishmen (not held in high regard here)
Pommie bastard: Englishman (some would say that the use of both words is redundant)
Postie: Mailman
Prezzie: A gift
Rezzie: Reservation for dinner or at a hotel
Ripper: Great, fantastic
Road train: Semi truck with numerous trailers
Roo: Kangaroo
Roo bar: Thick steel reinforcement put on the front of cars and trucks to prevent damage caused when hitting a kangaroo at full speed
Root: Fuck or fucked as in “This old car is completely rooted.”
Rubbish: To criticize (“She rubbished him in front of his friends.”)
Salute: The Aussie Salute, to brush away flies
Salvo: The Salvation Army
Sanger: Sandwich
Scratchy: A scratch-off lottery ticket
Servo: Gas station
She’ll be right: It’ll be ok
Shiela: Woman
Shout: To buy a round of drinks down at the pub (“It’s your shout.”)
Sickie: A day off work because of illness
Snag: A sausage
Stuffed: Fucked (“Get stuffed, ya bludger.”)
Ta: Thanks
Top End: Far north of Australia
Tradie: Tradesman, such as a plumber or carpenter. There’s a TV commercial for a home improvement center that uses the tagline “Go where the tradies go.” I keep telling Jamie that I want to go where the tradies go, but she shows no interest in going there with me.
Truckie: Truck driver
Tucker: Food
Uni: University (“She attends uni in Adelaide.”)
Ute: Utility truck which is basically an overgrown pick-up
Warnie: Short for Shane Warne, former star of the Aussie cricket team
Whinge: Complain (often combined with “Whingin’ bloody pommie.”)
Wog: Slightly racist description of someone from Italy or the wider Mediterranean region
Yabbie: Mud crab (pretty damn delicious, by the way)