Last time we were here in Australia we had the worst rental car experience of all time. I wrote about it then and you can read about the entire debacle here.

In quick summary, these Aussie rental car sheisters overcharged my credit card by $9000 and forced us to drive all the way across Australia to return the car in Perth instead of allowing us to drop it off at their local South Australia office.

But a few days ago, I wrote about my farsighted farmer father’s fortuitious foray into the field of fertilizer, and it made me realize I’ve had another rental car experience that was worse than the one here in Australia. Much worse, in fact.

Please strap yourself into the Way Back Machine as we set the dial for 1966:

During my teenage years, my dad made me work on the dairy every Saturday and Sunday during the school year, plus seven days a week during the summer. God, I hated it. From my perspective, the only good thing that came from that work was that he paid me the same wage he paid all his other workers. Combine that with the fact that I’m a compulsive saver and you will realize that I probably had far more disposable income than most of the kids I went to school with.

So when I was a senior in high school, I emptied out my bank account and paid cash for a brand new, bright yellow 1965 Chevrolet Malibu. This was back when the Malibu was a cool, sporty car — long before it became the bloated model grandparents drive today. 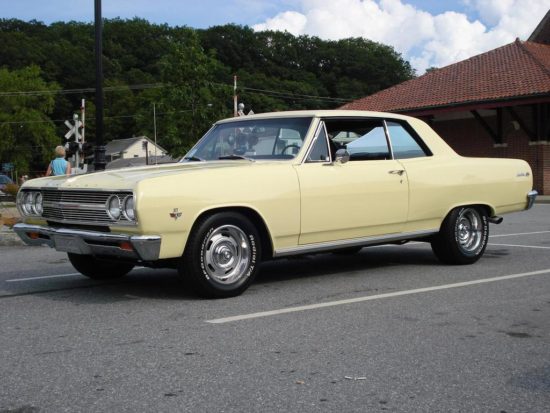 About a year later, my parents informed me that they were going out of town for a few days and that I was being left in charge of the dairy. I was given strict orders to keep an eye on things, and the last words spoken by my dad before he climbed into his car were, “Don’t go anywhere.”

Of course, I was a teenage boy, so I completely ignored his explicit instructions. As soon as their car disappeared around the corner, I jumped into my new car and headed for San Diego, about 100 miles away, to visit a buddy.

Halfway there a car stopped in front of me and I had to slam on my brakes to avoid a rear end collision. Unfortunately, the driver behind me did not follow suit and I looked into my rear view mirror just in time to see his car slam into mine at 60 miles per hour. The crash was deafening. It curled the rear end of my car up into my rear window.

The tow truck driver hauled my now destroyed Malibu back to San Bernardino and dropped me off just up the street from the dairy. I knew, however, that my wrecked car wasn’t my biggest worry, because I still had to tell my dad that I had disobeyed his direct orders.

I had it all thought out. I decided I would allow my parents to return home, relax a little, tell me about their trip out of town, and only then would I gently reveal what had happened. Maybe after an hour or two. In my fantasy, it was going to go perfectly.

Then they walked in the door. My dad’s first words were, “Where’s your car?”

For god’s sake, man, he didn’t even bother with a caring, “How are you?” Nor did he waste time with any sweet, loving words about how much he had missed me.

Nope. He wasn’t in the house five seconds when he said, “Where’s your car?”

I had no choice but to reveal the truth in all its horror. Not only had my bright yellow 1965 Malibu been destroyed, but it had been destroyed while I was disobeying his orders.

Much to my surprise, he took it very calmly. He slowly shook his head from side to side as if to demonstrate his extreme disappointment in me. And then he said, “I’m going to have to think about this overnight.”

I didn’t sleep much that night, worrying about what kind of horrible punishment he would mete out. In my mind, it might be flogging. It might be death. But I knew it was going to be horrible and even worse, I knew that I deserved whatever happened.

So the next morning he shocked me by saying, “You scrimped and saved for 16 years to buy that car and now you wrecked it. I figure you’ve been punished enough.”

Oh, my god. Was it possible that my dad had suddenly been transformed into a pussycat?

No such luck. He continued.

”But you still need a car to get to school and back. So here’s what I’m going to do. You’re going to drive the shit truck until your car is fixed. And you’re going to pay me $2 a day in rent.”

And that’s exactly what happened. I was forced to drive his dented, manure-covered dump truck everywhere I went for the next several months. And even worse, all the money I made milking cows went back to him to pay the rent he charged me on that godawful vehicle.

I’m reasonably confident that I may be the only person in the history of the world who has ever paid 100% of his income to rent a dented, shit-covered dump truck.