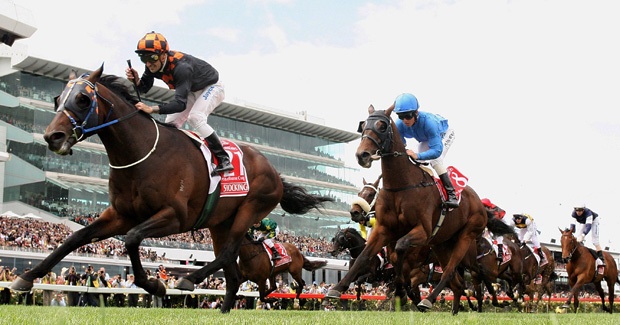 Many years ago I was lucky enough to work very briefly on the Australia Tourism Commission account. The Melbourne Cup horse race was the subject of one of my ads. They call it “the race that halts a nation” and today, the first Tuesday in November, is the day it halts.

As you would expect, the Melbourne Cup is a thoroughbred horse race that takes place in Melbourne. It’s the richest “two-mile” handicap in the world (“two-mile” in quotation marks because it’s slightly shorter than that since Australian switched to the metric system).

It halts the nation in the same way the Super Bowl would halt America if it were played on a Tuesday afternoon. One of the major Aussie TV networks is broadcasting live from the race course today. Millions of parties will be held around the country. Billions of dollars will be bet. And, of course, since this is Australia about a gazillion gallons — oops, that should be litres since Australia went to the metric system — of alcohol will be consumed.

My money’s on Dandino because instead of being owned by the typical racing billionaire, it’s owned by 129 average Joes across the country.

As they used to say in the Santa Anita commercials, “Go, baby, go.”

UPDATE: The race was run two days ago and the favorite won. My horse is expected to finish the race soon.