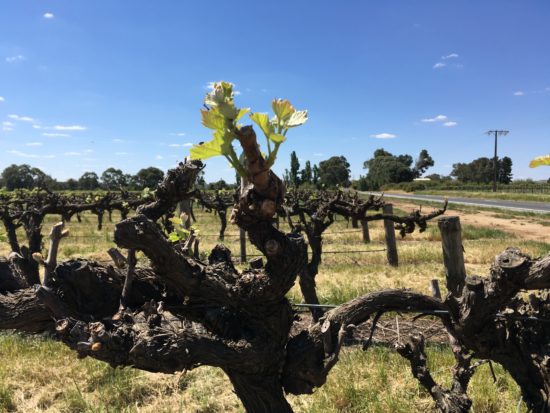 It’s still early spring here in the Barossa Valley, so I pulled over and took a photo when I saw the year’s first leaf popping out of a gnarled old grape vine just north of Angaston. But old and gnarled as this vine may be, it can’t compare to the Barossa’s oldest vines.

The Barossa is considered to be the home of some of the oldest vineyards in the world, a point of great pride for the region’s sixth and seventh generation vignerons who carry on the traditions of the original settler grape growers…

But the history simmers with uncertainty about exactly when and where the first vines went into the ground, and even more controversially, which are the longest and oldest survivors still providing valued fruit for the region’s prized shiraz.

The popularly accepted view is that a small plot of shiraz vines at the Langmeil estate north of Tanunda was planted in 1843 and that close to an acre of those 173-year-old vines are still producing grapes for Langmeil’s flagship The Freedom 1843 Shiraz which sells for $125.

The way I remember the story, a disease named phylloxera devastated Europe’s wine industry beginning in the 1860s. South Australia, because it was halfway around the world from Europe and its diseases, and because it began a strict quarantine that prohibited the importation of European grapes and vines, avoided those problems.

As a result, many European vineyards imported and planted cuttings of the disease-free Barossa vines, so it might be said that most of the European wines you order are actually South Australian wines.

And hard as it may be to believe, those same gnarled, old Barossa vines that saved Europe’s wine industry are still alive and producing outstanding grapes 170 years later.

I am just grateful that Jamie has an affinity for things that are old and gnarled.