Our buddy Daryl Mustard invited us to take a tour of his place of employment, which he described as “the largest bottling plant in the Southern Hemisphere.”

We had no idea how large it would prove to be. Holy crap. The numbers are absolutely mind boggling.

Daryl’s at the top of the org chart at a plant that bottles 400,000 dozen bottles of wine per week. In other words, 4,800,000 individual bottles go out the door every seven days.

The plant is immense, more than a million square feet, filled with robots, but empty of people. Well, not exactly empty, but the operation is so automated that they are able to do all that bottling, packaging, and shipping with only about six workers on each of the three daily eight hour shifts.

They had rules against taking photos inside the plant, but trust me — the Mustard clan is a lot better looking than the robots. 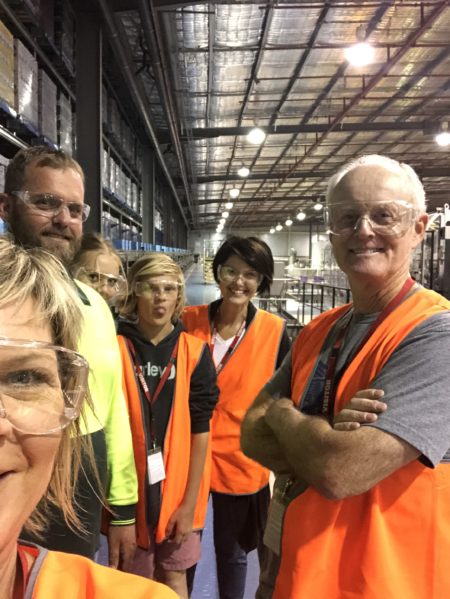 We’ve finally found someone who is worse than I am at taking selfies. Here’s half of Lisa, Daryl, a portion of daughter Ebony, my young pal Lochie, Jamie and me. Older sister Jamiee had the unmitigated gall to think showing up for her job was more important than this tour.