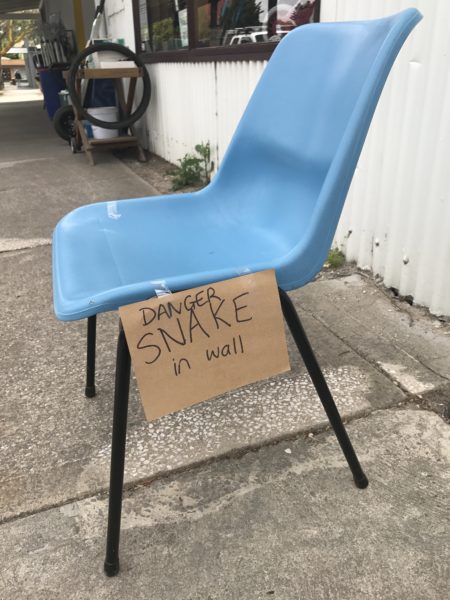 This morning I walked down to our neighborhood IGA grocery store to buy some bread. Two doors this side of the grocery store, I noticed a young woman down on her knees on the sidewalk taking a photo of something in front of the hardware store. I couldn’t tell what it was.

But as I approached, her husband, who was standing about five feet behind her, motioned me into the street.

“Don’t use the sidewalk,” he hollered. “There’s a brown snake sticking its head out of the wall.”

I wondered, of course, why he allowed his wife to get down on her knees so perilously close to the deadly serpent, but to each his own.

“They’re killers,” he insisted. “One bite can kill you.”

From what I’ve read and heard, this is true. One bite from a brown snake, especially a young one, will cause a relatively quick, but incredibly painful death. So painful, I’ve been told, that you’ll pray to die even more quickly.

So I had to laugh when I walked back up Sturt Street to see the outstanding precautions the owners of the hardware store had taken to protect their customers and other unwary pedestrians:

They put a cheap plastic chair in the middle of the sidewalk. Taped to it was a small handwritten sign that said, “Danger. Snake in wall.”

Oddly enough, the handwriting was so small that passersby had to get within striking distance of the snake in order to read the warning.

But I guess you get a bit blasé when you live in a country filled with so many deadly animals. A mere killer snake hanging out at a neighborhood hardware store apparently doesn’t merit too much of a warning.