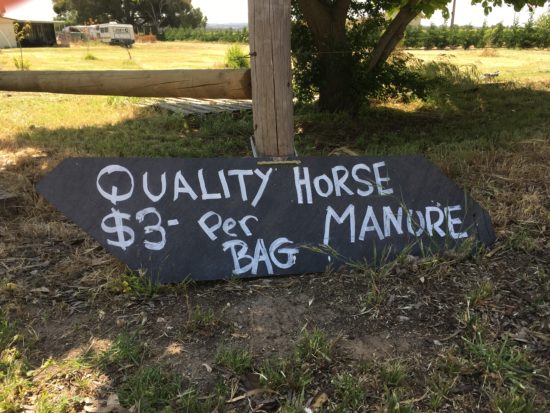 There used to be a sign on Century Boulevard a few blocks east of Los Angeles International Airport. It was famous, almost as famous as the HOLLYWOOD sign, and was known around the world for its…uhhhh…creativity.

It sat outside a strip joint and in huge, black block letters screamed, “LIVE NUDE NUDES.”

During the latter days of that sign’s existence, I worked at the Los Angeles office of a huge, international ad agency. The president and executive creative director of the agency often flew into L.A. from Chicago and passed that sign every time he drove into town. It bugged him. For years. Not because he was offended by nude dancers, but because he thought it was so poorly written and left an unclear message.

He was semi-famous in the advertising industry and wrote so beautifully that a major publishing house released a book filled with the brilliant memos he had written to his creative staffs around the world.

The sign bothered him so much that he eventually wrote one of those memos in which he analyzed and dissected all the possible variations of the LIVE NUDE NUDES sign. DEAD NUDE NUDES. DEAD CLOTHED NUDES. LIVE CLOTHED NUDES. And so on and so forth. The fact that I still remember it more than 40 years later tells you how funny it was.

So when I spotted this hand-lettered sign propped up against a fence post just around the corner from our cottage, I understood exactly how my former employer felt:

I can imagine the memo my former boss would have written about that headline.

I can tell you this with a certain degree of authority because I am one of the few people you will ever meet whose family made a living selling shit. Consider it proof of two things: (1) My illustrious farmer father was a very smart man, and (2) He would do almost anything to provide for his family.

I am about to reveal something that many, perhaps most, city folks may not be aware of. I hope you are sitting down, because this revelation may come as a bit of a shock.

Milk is not the only thing that cows produce. In fact, the amount of milk they produce pales in comparison to the prodigious piles of poop they produce. Put a few hundred cows together in a pasture and it quickly piles up, and on most dairies, becomes unmanageable.

All the other dairy farmers in Southern California eventually solved their common problem by going in together and buying a large plot of land to which they hauled their excess excrement. The pile grew so quickly that the formerly flat parcel of land soon became home to a pile of poop hundreds of feet high. They named it — I swear that this is true — Mount Shitney.

But back to my father’s bovine byproduct business.

I have distinct memories of him standing on the front porch greeting neighbors who walked over to the dairy from the adjacent residential neighborhood to complain about the odors that frequently wafted across the street.

My dad would look confused by their complaints, inhale deeply, and with great conviction say, “I don’t know what you’re talking about. Smells like money to me.”

The angry neighbors always walked away looking defeated, suspecting that the smell of manure would still be in the neighborhood long after they had moved away.

But how, you may ask, did wily ol’ Bill deYong make money selling something other dairy farmers had to pay to get rid of? Simple. He sold it by the pick-up load to people who needed to fertilize their yards and gardens.

In the early days, it was hard work. Filthy, back-breaking work. He had to shovel it by hand into the back of his pick-up, drive to the buyer’s home, and then shovel it back out of the pick-up onto whatever spot the buyer pointed to.

Business boomed and before long he could sell more shit than he could shovel.

So he innovated. He designed and built an elevated grate under which he could back his truck. Then he scraped up a big scoop of fertilizer behind his tractor and drove it up a specially-constructed ramp and over the grate, which allowed the fertilizer to drop through the grate and directly into the bed of his truck, immediately reducing a process to about 30 seconds that had formerly taken about 30 minutes.

There was so much demand for his fertilizer that he had to innovate again. He purchased a pick-up truck without a bed and had it custom-fitted with a small dump truck bed.

Voila. With those two innovations he became the shit king of San Bernardino. He sold as much manure as his cows could manufacture. An efficiency expert would have said that his distribution was constrained by bottlenecks in production.

Ahhh, but how did the good residents of San Bernardino know about his fertilizer business? That brings us back to that sign shown in the photo at the top of this blog item.

For many years my dad ran a tiny classified ad every Monday through Friday in the San Bernardino Sun-Telegram newspaper. I can quote it from memory:

My dad, the uneducated farmer, clearly understood advertising better than his smartass teenage son did. When I asked him why he needed the word “FINE” in his headline, he looked at me like I was his idiot child and said, “I don’t want anyone to think it’s shitty fertilizer.”

Hard to argue with his logic because the phone rang day and night. We had to keep a pen and a pad of paper next to the phone just to keep track of the ever-increasing number of fertilizer orders that rolled in.

Yes, you might say my father was a manure entrepreneur. The Poobah of Poop. An expert in excrement. Number one when it came to number two. A crapitalist. The Don of dung. The GM of BMs. The Captain of Caca. The Pharoah of Feces. The Top Guy of Cow Pies. A regular defecation sensation.

Many years later, he was in a contemplative mood one day while we were having lunch. He was trying, without much luck, to understand the advertising business I had gone into. He looked at me, his brow furrowed, and said, “What’s the biggest difference between what I did for a living and what you do?”

Without the slightest hesitation I said, “You deal in cow shit. I deal in bullshit.”

He laughed, which was always one of my greatest pleasures.

UPDATE: In the comments section (right under the headline), Ray mentioned Bandini Mountain, which was the sanitized advertising name for the less acceptable Mount Shitney. In case you thought I was making the whole thing up, here’s a 1970s Bandini Fertilizer commercial that was actually filmed on Mount Shitney.

ANOTHER UPDATE: We sold the family farm after my dad passed away. The state of California, in its extreme wisdom, provides a special tax deduction on the sale of farm property. They denied us that lower tax level because they said we had not proved to their satisfaction that the property had been a farm. The dispute went back and forth for months with no resolution. We sent them photos the farm, newspaper articles that mentioned the deYong dairy, affidavits from neighbors, and copies of tax returns showing that my parents’ primary source of income was farming. None of that made any impression on the leeches at the California Board of Equalization. Then our realtor had an idea. “Send them this geological report,” he said. The buyers had commissioned the survey and the final report noted that a pile of cow manure twenty feet high was located on the southwest corner of the property. A couple weeks later we received a letter notifying us that the State now accepted that the land had been a farm and that we had been granted the extra tax deduction. In other words, we were able to profit off his fertilizer business even after his death. No shit.