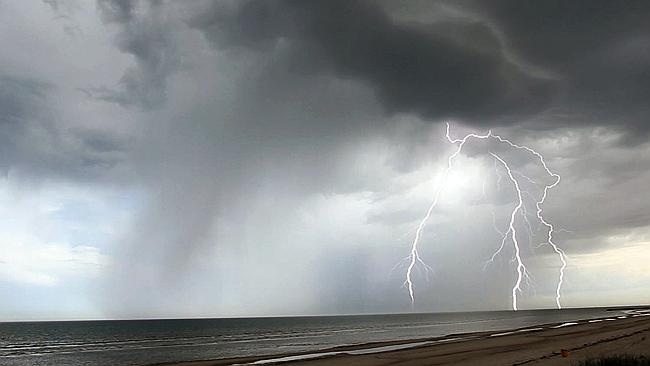 Thirty or so years ago, I flew to Dallas to produce some radio commercials. It was the middle of winter, but the weather was fantastic — 75 degrees, sunny and clear.

Well, that’s what it was like when I went to bed. When I left for the airport the next morning it was ten degrees and a “blue norther” storm was coming to town. That 65 degree switcheroo occured over about ten hours. I was born and raised in mild Southern California and had never seen anything like it. Until today.

Yesterday was the hottest day of the year in South Australia. It topped out at 113 degrees so we drove into Adelaide to watch “American Hustle” in a nice, cool theater.

We climbed back into our car late in the afternoon to drive back to the Barossa and noticed that the temperature had dropped to a relatively pleasant 95 degrees. That’s when it got weird.

The bright, cloudless sky that was up there as we entered the theater had been replaced by a dark, cloudy sky and lightning was flashing all around us. Before long huge, bulbous drops of rain began pelting down and the temperature began dropping. Within twenty minutes it had dropped to 68 degrees.

That’s a drop of 27 degrees in twenty minutes. Amazing. But probably something we should get used to if we’re going to live near Dallas.