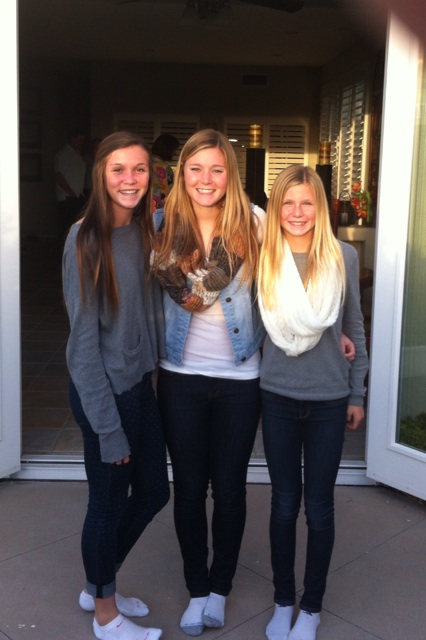 Jamie and I often talk about how amazing it is that we should end up with five such bright, talented, hardworking and good-looking godchildren.

I did an item about Jack on his birthday in November and have another one ready for sister Stella on her birthday in a couple weeks, but our three other goddaughters don’t have birthdays until June, when we’re back in the United States and this blog is long forgotten.

So here’s a bit of bragging about the Smith girls:

Tatum  (center of the photo)- She’s a stud soccer player who got a full scholarship to play for the Division I University of Wisconsin Milwakuee team that had won its conference for 13 straight years. Tatum’s so good that she started as a freshman and we’re proud to say the team has now won its 14th straight title. They lost to Michigan in the NCAA playoffs, but she said that all the pomp and ceremony made her feel like an NFL player. All that and she gets straight A’s. (As you can tell, she’s a beautiful girl, but if you want to see something really scary, you should see her game face. Holy crap! She looks absolutely fearsome on the field.)

Avery (on the left) – Jamie and I laugh about the time little three year old Avery came to our house and baked cookies with Jamie. We never imagined that she’d grow up to be a stud athlete, but she has. Avery ran varsity cross country as a high school freshman and ran in the CIF championships in her sophomore year. Her coach called her the best athlete he’s ever coached. On top of that, she plays top level club soccer and her high school team also won its league title. Of course, she also gets straight A’s.

Kendal (on the right) – Already following in her big sisters’ footsteps as a stud soccer player and mom Lori says she may be even better than they were at the same age. Kendal’s also a darn good surfer, but her parents hope she doesn’t hang up the cleats and buy a board because there aren’t a lot of colleges that offer surfing scholarships. Needless to say, she gets straight A’s, too.

Jamie and I consider ourselves incredibly lucky to have three amazing Smith and two amazing Ginsberg god children. Obviously, they all get their talent, drive and good looks from us.