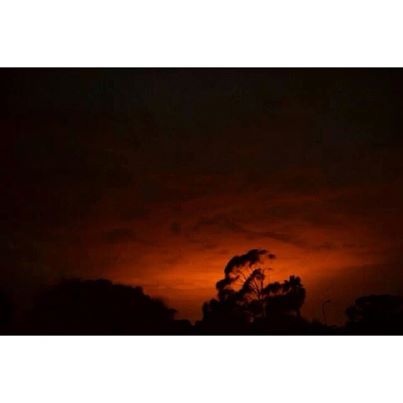 We went to another outdoor movie out at the beautiful Jacobs Creek winery the other night. It had been about 110 degrees during the day and we thought it might be a beautiful night to enjoy the warm evening breezes under the stars.

About 30 minutes before the movie was scheduled to start, those warm evening breezes suddenly turned into gale force winds. We were pelted with branches and bark flying off the towering eucalptyus trees that surrounded the lawn area. Then the winds began lifting the outdoor screen off the ground. Several workers ran out and attempted to secure it to the ground, but a few minutes later they announced that the movie had been cancelled because of the dangerous wind conditions.

We drove home and went straight to bed. A few minutes later we were awakened by a loud pounding on the door and when I opened it, Scottie, our next door neighbor announced that an out of control bush fire just over the hill was heading toward Angaston and that the whole town might have to be evacuated. He told us to be ready to leave if necessary. He took me outside to look at the night sky, which was glowing red.

We packed all our bags just in case. Around midnight, the winds suddenly stopped. I mean flat out stopped. It was eerie that they had been so strong one minute, then absolutely still the next minute.

Angaston was safe, but just over the hill the Eden Valley was devasted. I think 50,000 acres were burned, a dozen houses were lost and many, many domestic and wild animals were lost. One of our friends had to evacuate and she didn’t know for a day or two if she still had a house to go home to. Luckily, it had been spared.

Funny, isn’t it, that Jamie and I spent most of our lives in wildfire prone Southern California, yet neither of us has ever come closer to one than here in the Barossa.