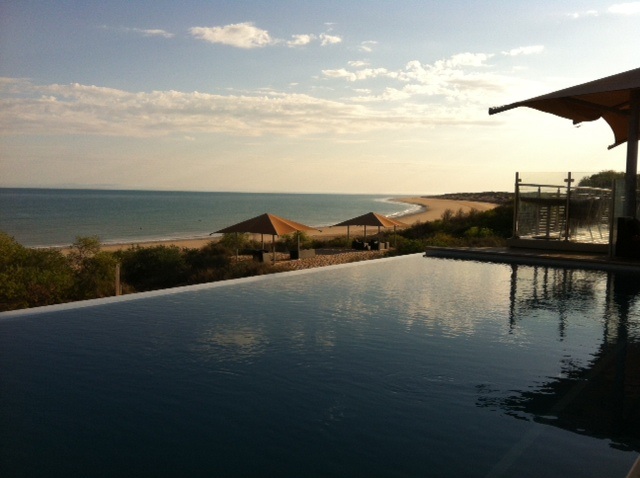 Jamie loves eco-lodges, but as far as I can tell, “eco-lodge” is a term derived from ancient Latin that means “You’re going to pay a small fortune to sleep in a tent and then pay through the nose for any additional services.”

Five years ago we stayed at a fabulous Australian eco-lodge, El Questro, in the northeast corner of Western Australia. This was when I first started to get sick, but didn’t yet know I had Lyme Disease.

We drove for nine hours to get to there. And when I say “we” I mean “I”, because Jamie is terrified of driving on the other side of the road. I was sick as the proverbial dog by the time we arrived. Our “luxurious tent cabin” was not yet ready for us, so we found chairs in the outdoor lobby of the eco-lodge. I felt terrible and went to sleep immediately.

An hour or so later they came over to tell us that our “luxurious tent cabin” was ready for us and that we should walk to it so we understood where it was located before we attempted to park our car.

As we were trudging through the sand, I felt awful and I guess that was clear to Jamie. She said, “What’s the matter with you?”

“Where’s the luxury?” I whined. She, being he dutiful wife that she is, completely ignored my plaintive cry.

Well, it turns out the luxurious tent cabin wasn’t exactly luxurious, but it was very nice. El Questro was spectacular and we had a wonderful time.

And that brings us back to our current eco-lodge.

We’re in the middle of a heatwave and it was 108 degrees when we checked into this particular eco-lodge (which shall remain nameless). I once again found myself trudging through sand to get to our tent cabin. I was less than impressed, but Jamie immediately proclaimed that the resort was everything she had hoped it would be. I pointed out the mold on the tent’s ceiling, but she told me to shut up and stop complaining.

We sat by the pool and ordered drinks. When the waiter delivered them he said, “We didn’t have any coconut milk, so I made the piña colada with skim milk. Let me know if it’s ok.” One sip was enough to tell that it wasn’t. When we complained that the other drink, the one named after the lodge, didn’t taste very good, either, he said, “Yeah, that one’s not very good. I don’t know why they keep it on the menu.” And then he charged us $16 for each of them.

That small, but lovely pool overlooked a stunning golden sand beach that we later shared with just one other couple and their two small children. But eventually you have to leave the pool and the beach and return to your tent cabin. The one that has no television, no internet and no air conditioning. It does have a rusty fan that recirculates the air, but recirculating 108 degree air does not provide much comfort, much less luxury.

We went to sleep with the fan blowing full speed, but doing nothing to alleviate the heat. Yet somehow, by the middle of the night, it was so freezing ass cold that we had to turn off the fan and throw another blanket on the bed.

I could go on with a litany of bitches, but I won’t. Let me just sum this story up with what Jamie said by the morning of day two:

“I’m done. Give me my creature comforts.”

Everyone in favor say, “Aye.” Ahhh, it appears we have a unanimous decision.