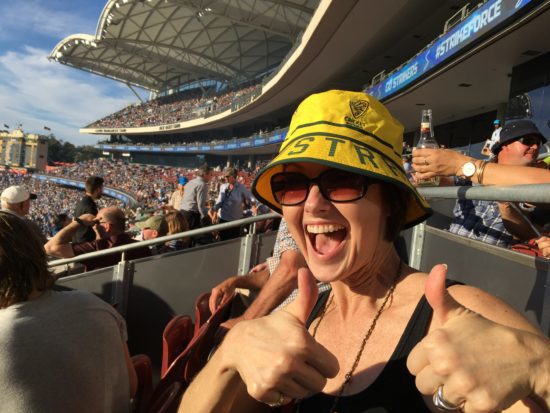 Australia has two national pastimes — Australian Rules Football, a fast and violent game also known as footie, and cricket, a slow, plodding game known as the dullest thing this side of watching paint dry.

Baseball has been called genteel and leisurely. Yet the pace of a baseball game is absolutely frenetic compared to cricket.

Nevertheless, Jamie and I have come to love this odd game. We originally agreed with those who criticize its glacial pace, but the more cricket we watch, the more it grows on us. So much so that we went into Adelaide the other night to attend a Big Bash game at the Adelaide Oval.

If a flying saucer were to land next to my car in the middle of the parking lot at Dodger Stadium in Los Angeles, the first thing I would do (well, the third thing really, after paying the aliens’ astronomical parking fee, and then buying them each Dodger dogs and beer) is explain the game to them.

It would take about a minute to cover all the basics. Maybe less.

For example, the names of the positions in baseball are pretty self-explanatory: You have first base, second base, and third base plus left field, center field and right field. The pitcher is the guy who stands in the middle of the field throws the ball and the catcher is the guy who squats over in one corner of the field and catches everything the pitcher throws. The only position on the field that isn’t self-explanatory is shortstop and it’s easy enough to explain that he’s the guy who plays between second base and third base.

But the names of the positions on the cricket field seem to have been determined by throwing a bunch of unrelated words into a hat and then pulling them out at random. It has positions with inexplicable names like deep mid-wicket. Wide long-on. Silly mid-off. Fine leg. Fly slip. Extra cover. Cow corner. Off stump, middle stump, and leg stump. And then there’s the most confusing position of them all — deep square. How can a position be called “square” on a field that’s oval-shaped? 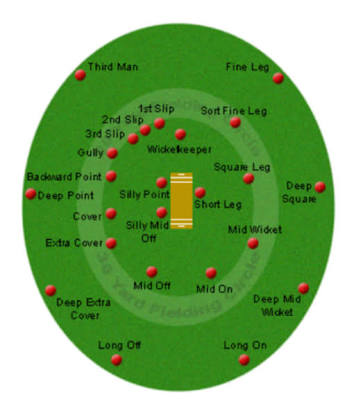 And the positions are just the beginning of the confusion. When we watch cricket on TV, we hear the announcers say things like, “He was out for a duck” or “Oh, it looks like he bowled a dibble-doubly” or “He got a wicket with his googly.” They toss in words and phrases like “Yorker” and “Reverse tang” and “LBW (Leg Before Wicket).” And we mustn’t forget “sticky wicket,” the one piece of cricket terminology that’s well-known, but little understood in America.

Then there’s this: All the players scurry to the opposite end of the field after every sixth ball has been delivered. And then, as if that weren’t confusing enough, they all run back to their original positions six balls later.

Every other year, England and Australia battle each other in an epic series of cricket matches called “The Ashes.” It’s the greatest rivalry in the world of international cricket and has been waged semi-annually since way back in 1877. “The Ashes” series includes five games spread out over nearly two months. Each game can last as long as eight hours per day and can be contested for five consecutive days. If your skill set does not include higher mathematics, please allow me to calculate that for you: Eight hours a day for five days equals forty hours. (As if to prove the gentlemanly roots of the game, they break each day for morning tea, lunch, and afternoon tea.)

And then, despite the heroic efforts put forth by both teams during that five day, forty hour marathon, the game may end in a tie even if one team is hundreds of runs ahead.

For example, Australia just regained the much-coveted Ashes trophy by defeating those detested limey bastards four games to none in the five match series. Despite the fact that Australia was ahead 590-491 toward the end of day five, game four ended with no winner.

(Note: Due to the world’s current critical pixel shortage, it will be impossible for me to explain how that is possible.)

The winner of the Ashes series takes home what must be the world’s least impressive trophy, a wooden cup about six inches tall. In the photo below, Steve Smith, the captain of the victorious Aussie squad is holding the diminutive fruit of his team’s labors. 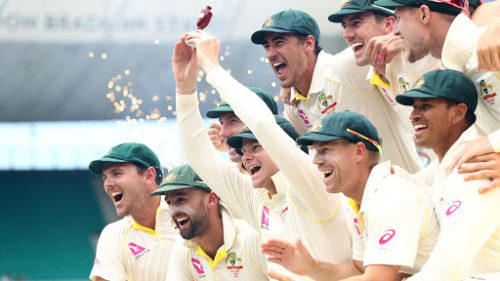 As I said earlier, Big Bash is a relatively new type of cricket and it is taking the cricket world by storm. Instead of spreading out over five days, a Big Bash game lasts only about three hours, about the same as a baseball game. In Big Bash, each batsman is expected to smash the ball as far and as high and as often as possible. It’s become immensely popular and is being played in front of sell out crowds across the country. One Aussie TV network broadcasts Big Bash games in prime time seven nights a week and it is experiencing a ratings bonanza.

So Jamie and I bought tickets to the Adelaide-Melbourne game last Tuesday night. We were joined by 43,000 other people at the beautiful Adelaide Oval.

Think about what a remarkable number that is. There are only 1,700,000 people in all of South Australia and two-and-a-half percent of them gathered together to watch a Big Bash game. If a similar percentage of California’s population bought tickets for a Dodgers game, the stadium would need to seat nearly a million people.

It was a great game. The Adelaide Strikers put on a Ruthian display of power and handily defeated the Melbourne Stars. We joined all the other fans in screaming our approval.

The Big Bash League is sponsored by KFC and its marketing people created something called the Buckethead Army. Somehow they convinced thousands of fans to wear their chicken buckets upside down on their heads.

I know exactly what you’re thinking. Who would be crazy enough to wear a KFC bucket upside down on their head? 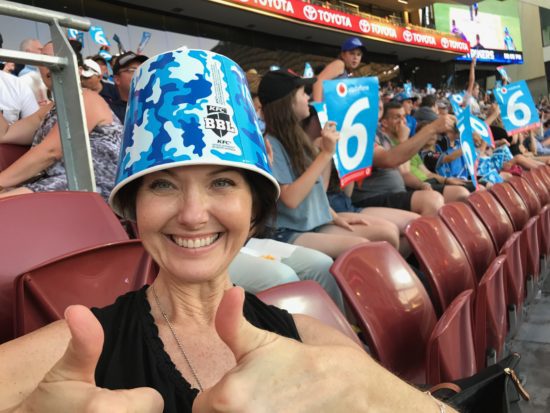 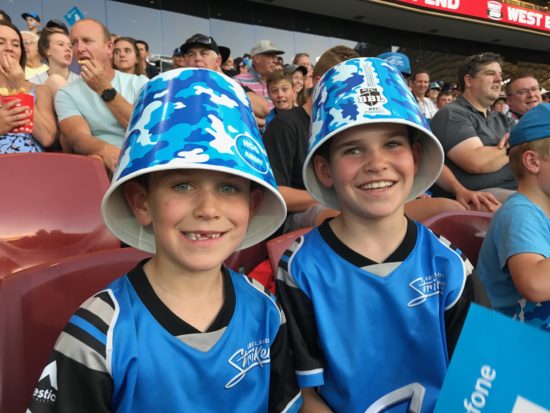 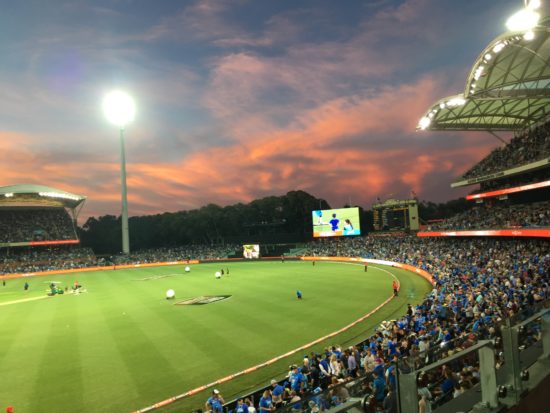 It was a perfect evening at the Adelaide Oval. A very strange, but beautiful cloud formation rolled in right at sunset and lit the western sky on fire. 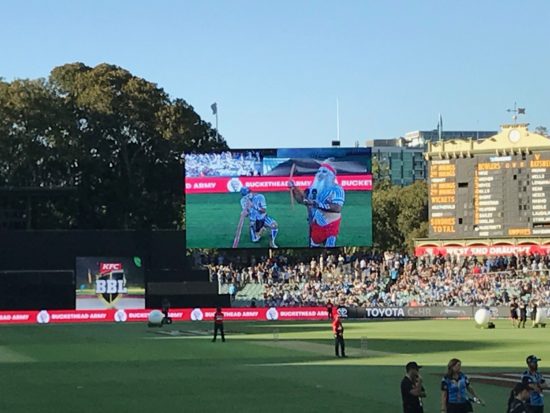 Every public event in Australia begins with a traditional aboriginal blessing. You can see the ceremony on the digital scoreboard above. 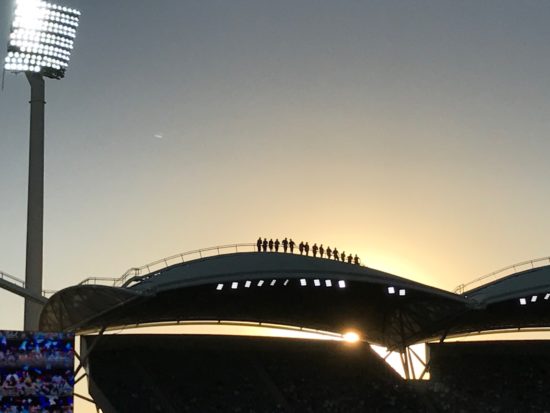 It can’t match the grandeur and scale of climbing the Sydney Bridge, but some fans enjoy a sunset tour atop the Adelaide Oval.