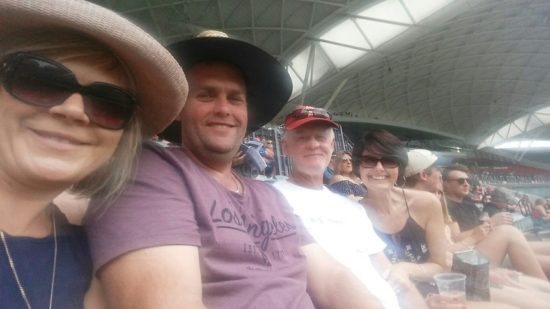 Our friends Lisa and Daryl Mustard took us to an International Football game at the beautiful Adelaide Oval. Daryl’s employer was one of the game’s primary sponsors, so we got some very nice seats in the shade, midfield, in the second deck.

What, you may ask, is International Football?

None of us really knew. Luckily, the Mustards brought along their 17-year old daughter Ebony and her friend Bailey, who knows everything about Aussie Rules Football and its cousin, International Football.

According to Bailey, International Football is an Irish game that’s an odd hybrid of what Americans call soccer and Aussie Rules Football.

That being said, please don’t ask what Aussie Rules Football is, because Jamie and I have never been able to figure it out. All we know is that each side fields a team of fifteen big, burly men who wear jerseys and tiny shorts. They frantically run around a huge oval field — apparently at random — while whacking the ball with their fists or running with it until they are tackled to the ground or kicking it to other parts of the field for reasons we cannot comprehend.

Far as I can tell, these guys are some sort of genetic supermen bred specifically to play this fast, violent game, because mere mortals could not withstand the kind of extreme physical punishment they take in the course of four 18 minute quarters.

Many years ago the ill-fated Ontario International Speedway staged a day-long series of motocross races. It was the first time I ever heard the word “motocross.” My boss at my first ad agency wrote a brilliant radio commercial that started with the words “There’s only one rule in motocross…(LONG PAUSE)…And nobody knows what it is.”

That’s kind of how we felt after the game. Our understanding of the rules was only slightly more complete than it had been before the game.

But the hotdogs were delicious. The Adelaide Oval was a great. And the company couldn’t have been better. We had many, many laughs with the Mustard clan (even if they do make fun of our American accents).

It was a great day.

As the Aussie team ran onto the field they were greeted by this tender Australian ballad. 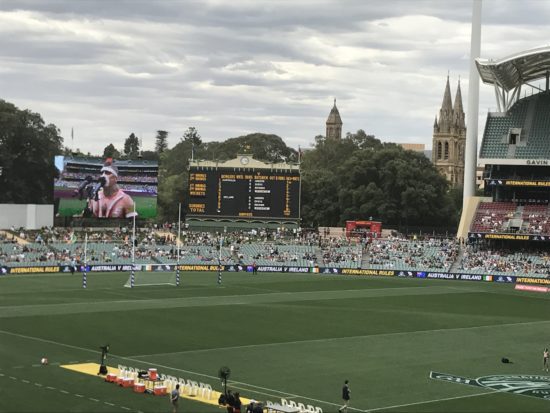 I love the contrast between the sparkling new Adelaide Oval and the 150-year old St Peter’s Cathedral in the background. Keeping the stadium’s original manual scoreboard right next to the new digital scoreboard was a very nice touch. 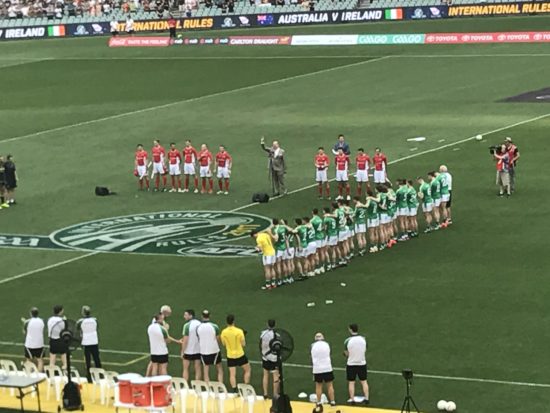 Here’s something unusual — football players all standing for the national anthem.

And as the game ended (with a 63-53 Aussie victory), they left the field with Men At Work’s classic blaring from the Oval’s loudspeakers. (Yes, they played MAW’s original song, but I found this cool version online, so what the heck.)