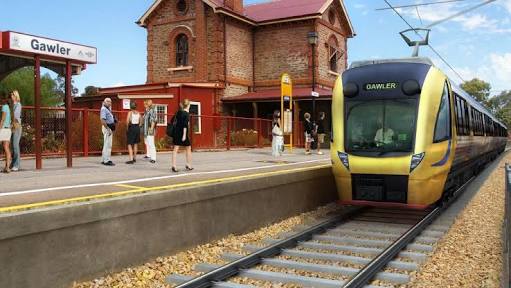 We are very happy to have finally discovered the joys of the Adelaide Metro system. Now, instead of driving 90 minutes into Adelaide and paying a small fortune to park, we jump on the train in Gawler and take a nice, relaxing trip into the city. Central Station is right downtown, convenient to the city’s main shopping and business districts, the River Torrens, the theater complex, and the Adelaide Oval.

When we moved to San Luis Obispo, I was still doing lots of work down in Orange County, a couple hundred miles away. It was about a four hour drive through terrible Los Angeles traffic, so I began taking the train.

Ahhh, this is great, I thought. I can work on my laptop computer, take a nap, have a snack, and get up and walk around. (And when I got to Orange County, my Mercedes-Benz client always had a car waiting for me.)

Then the train trip south went — you’ll pardon the expression — south. Each trip took longer than the previous one. The trains seemed to spend more time sitting on sidings than actually rolling down the track.

A conductor eventually told me the slowdown in service was caused by severe deterioration of the rail system in the San Joaquin Valley. The tracks had been ignored for so many years that they were no longer able to handle long, heavy freight trains. But instead of repairing those tracks, the powers that be merely rerouted that traffic to the coastal route, and since freight trains have priority over passenger trains, the latter were forced to sit on sidings every time one of the former was coming in the other direction.

Now that you know more about California’s rail system than you ever wanted to know, I should move quickly (something the trains were apparently unable to do) to explain that this made the passenger trains run later and later and later.

The final straw came one day when my route, which was scheduled to take four hours, stretched on for thirteen and a half hours.

As if that weren’t bad enough, the train was packed with drunken rugby players on their way home from a weekend tournament. They ran up and down the aisles screaming at the top of their massive lungs. Every time one of the conductors left a car, one of those morons would grab the microphone and scream, “Everybody get naked!”

And as if that weren’t bad enough, the fat kid sitting in front of me in the jampacked railcar thought farting was funny. Now don’t get me wrong, I like farting as much as any man. But not in public. And not in small, enclosed areas. And not after I’ve eaten a diseased skunk. Which, based on the odors emanating from the row in front of me, must have been exactly what this kid had just done.

Add it all together — the 13+ hour ride, the drunken rugby players and the flatulent fat kid — and I decided that would be my last trip on the train.

Until we got to the Barossa Valley, that is.

Not only do we have membership cards at the Co-op grocery store here in Nuriootpa, but we just got our brand spankin’ new Metro cards, which allow us to ride the Adelaide train system from the Barossa Valley to Adelaide and back.

And we get discounts, too.

Unlike American trains, the Adelaide Metro cars are new and clean and fast.

Our Barossa Valley-Adelaide-Barossa Valley trip today was delightful. It was on schedule, on time, and we spotted neither a drunken rugby player nor a flatulent fat kid.

Ahhhh, life just doesn’t get any better than this.